heads or tails - on the wall

The Heads or Tails show opened on Friday (2 Nov). Here is "quiet" on the wall: 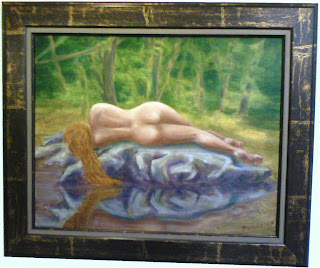 Posted by Charcoal Moon at 11:08 AM No comments:

Here she is! I glazed her body and the background twice since the last post (the interim glaze did not show enough of a difference to merit a posting). I also glazed the water with a weak layer of Payne's Gray. She'd now in a frame and I will deliver her to the Moca Gallery today. 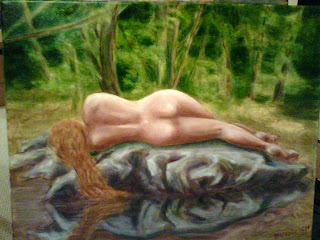 Opening night is Friday, November 2, 2007 at the Moca Gallery.

Posted by Charcoal Moon at 6:13 AM No comments:

So I am running out of time! This painting needs to be in Georgetown (DC) on Wednesday. That means dry, framed, and labeled. But no worries -- after today, I probably only need to touch it one more time.

Today I focused on brining out the colors. So I glazed the background greenery with Sap Green and Prussian Blue, with a bit of Lemon Yellow for highlights. I glazed the area between the trees and the goddess with Lemon Yellow to make it look like she in lying in a well-lit clearing on the water. That will help make the bright highlights on her body make sense. I glazed the shadowed areas of her body with burnt umber. I touched up the rock with Prussian Blue and a purple made from Alizarin Crimson/Prussian Blue. Using the fat-over-lean principle I added more dark "highlights" to her hair (it is interesting how she still looks blond, but now most of her hair color is in the dark range -- the blond look is from the original Yellow Ochre that shows through as highlights). I also worked a bit more on her reflection, trying to get it to parallel her actual self more closely.

Notice how much more vibrant the color is after today's glaze. If I had more time, I would glaze her body several more times to make it "pop" out of the canvas. After the November show, I will continue to glaze her -- that is one of the great things about oils: more paint can always be added. 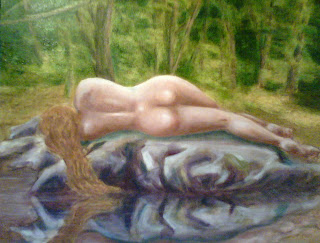 The glazing continues -- body, leaves, rock, reflection. The color becomes more alive with each added layer. Is it done yet? No -- but I am not sure if it will require one, two, or three more glazes. Stay tuned... 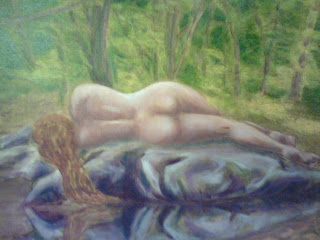 Today I added another glaze to her body. I applied first glazes to the rock and background. The body colors were again a combination of Alizarin Crimson, Burnt Umber, and Prussian Blue. The rock and shadow below her body are the same colors, but with a heavier use of blue. The background was done first with Sap Green and then some Terra Verte was used in a few places. 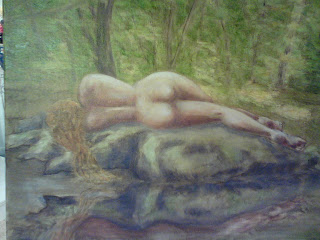 Total time today was 2.5 hours. I spent the first 20 minutes just mixing the colors. Here is a shot of what my palette looked like: 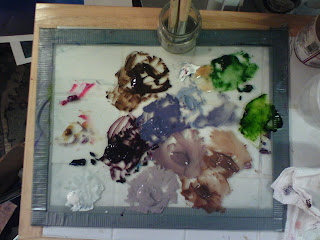 Posted by Charcoal Moon at 11:14 AM No comments:

For the Moca DC Gallery show "Heads and Tails" that begins November 1st, I decided to paint an image from a beautiful photograph. That photograph is here: 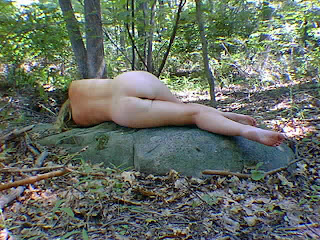 The first step, the underpainting, was done in raw umber. The entire canvas is covered in an umber mid-tone, which is then wiped away to reveal light areas and more concentrated umber is used for the dark areas. This underpainting took about three hours (note, the photograph is 8x10; the painting is 16x20): 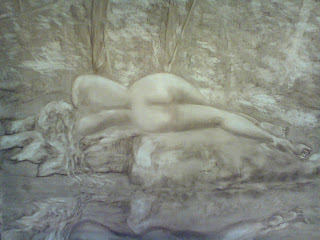 Notice that I have changed the positioning of her body a bit, to allow her head to show (I did not want her to look like she was decapitated). Therefore, I brought her shoulders closer. My art teacher thought that it would better if there was water in the foreground instead of leaves, so I have tried to add that and to show a partial reflection of her.

After letting the underpainting dry for a week, I next glazed her body with a transparent mixture of Alizarin Crimson, Indian Yellow, and Prussian Blue. I used varying values of that mixture for the light and dark areas. I glazed her hair with a transparent mixture of Indian Yellow and Raw Sienna. I used the Indian Yellow to highlight leafy areas where the sun is brightly shining. I used a more blue version of the flesh color to capture the shadowed areas of the rock. The result was the first glaze, which took about two hours: 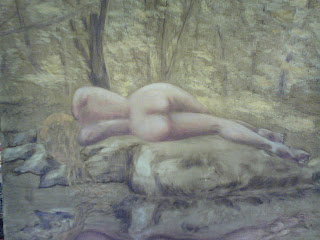 Posted by Charcoal Moon at 12:56 PM No comments:

heads and tails - kicking around some ideas

I am thinking about completing a piece for Moca DC Gallery's "Heads and Tails" themed show on November 1st. Here I am experimenting with positioning and color of a few photographs I have on hand.

Posted by Charcoal Moon at 4:18 PM No comments:

a mother's love in spring 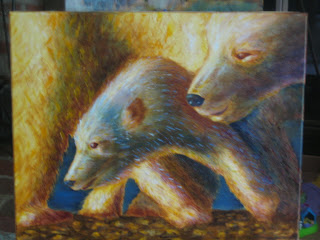 This piece was inspired by a photograph in a wildlife magazine. I tried to capture the motion of the feisty, energetic polar bear cub as its mother mindfully watches (and seems to smile). I exhibited this piece at the Falls Church Arts show Lions and Tigers and Bears in June 2007 and at the Moca DC Gallery in August 2007.
Posted by Charcoal Moon at 3:46 PM No comments: