It is always challenging to paint a model in a short 3-hour session using oils. But I love a challenge. For this piece, I covered the canvas with a thinned layer of burnt umber. Then, just as when making a charcoal drawing, I began to remove paint from the highlighted areas, and added thicker paint to the darker areas. At the end of 3 hours I had the following monochrome piece: 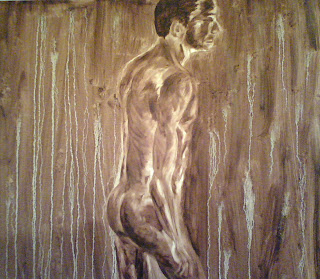 One of the artists in the session commented that she liked the wood-grain type of pattern in the background. I realized that I did too. That is something nice about working side-by-side with other artists -- we share thoughts and ideas and it becomes very enriching. I used some "secret" techniques (LOL) to cause the white streaking, which I thought added drama to the piece.

At the session the following week. I planned to add color to the piece. Luckily, we had the same model that week (that is never a given). However, he assumed a seated rather than a standing pose. Another challenge! So, I used the feelings I got from his expression, positioning, and the light to help me to decide which colors to apply. The model (Emmanuel) emanates a warmth which I tried to capture by using mostly warm colors. I like how the lemon yellow communicates his glow. The result of adding color is here: 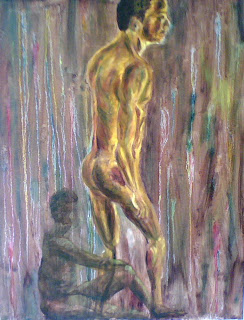 I kept my colors pretty pure on my pallet, but mixed them a bit on the canvas. Once I had added about as much color as I could without getting things muddy, I still had some time remaining, so I decided to incorporate Emmanuel's seated figure. As I was adding that, it almost felt like it was a shadow of him, rather than another figure.

We will have a different model this week, so I will no longer work on this piece at the O Street studio, but will continue to work on it in my own studio. I will add many more glazes of color. My goal is to get him to glow and burst from the canvas.
Posted by Charcoal Moon at 4:39 PM No comments: